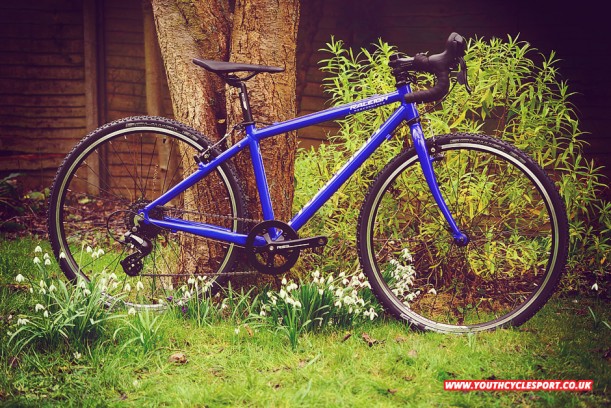 Raleigh has rediscovered the racing pedigree that it was once so famous for, and its current adult cyclocross bikes are some of the best available – there’s a real buzz about Raleigh now.

We were very pleased to see such a strong contender from Raleigh, showing that the company understands children’s requirements.

Our test rider really took to the Raleigh. He said it was one of the best in the group for “chucking around”. It was the bike that he chose to ride for fun after all the formal testing and photography was done.

The track record of big brands trying to offer quality children’s bikes is not good. Their designers, product managers and marketing people rarely seem to understand what’s really important, and the resulting bikes are often badly sized and far too heavy.

So a couple of years ago we would have been sceptical about a brand like Raleigh entering this market. But more recently Raleigh has rediscovered the racing pedigree that it was once so famous for, and its current adult cyclocross bikes are some of the best available – there’s a real buzz about Raleigh now.

At the launch of its new 2015 Performance range we knew that Raleigh was taking the children’s market seriously, and the new Performance 26 road/CX bike’s specification certainly looked competitive.

Like several other bikes in this group test, the Raleigh looks quite similar to the iconic bike from Islabikes that created the market in the first place. Not surprising, perhaps, given how successful the Luath has been.

With its plain blue frame and forks and its black finishing kit the Performance 26 doesn’t make much visual impact, but it looks mature and business-like.

With a virtual horizontal measurement of 500mm the Raleigh is average sized amongst this group. It is quite a compact frame design though (i.e. a steeply sloping top tube) so there’s a lot of standover height and the saddle could be set very low if required. However, if a child really needed their saddle set quite that low then the bike is probably too big for them.

At 152mm its cranks are the appropriate length for the rider of a bike like this.

The bars are the same width as all the others but they are shaped rather differently – we’ll say more about this later.

However, the saddle lets the bike down and prevents it from getting full marks for geometry and fit. We recognised it as the same adult saddle that was fitted to the RX Elite that we tested previously. It’s too long and wide for this bike and limits the rider’s agility when riding out of the saddle.

The Microshift brake levers have a suitable short reach for small riders.

The Raleigh’s very compact frameset has traditional round aluminium main frame tubes and steel forks. It’s an unremarkable looking frame with its plain mid-blue finish and simple branding, and we would like to have seen some of the panache trickle down from Raleigh’s great adult cyclocross bikes.

There are braze-on fittings for a single bottle cage and a rear rack. There are mudguard eyes front and rear, plus a chainstay bridge with a drilling to mount a rear mudguard too. So the bike would make a good tourer as well as cyclocross and road racing bike.

The Raleigh is supplied by default with Kenda road tyres. Good Raleigh dealers should be prepared to supply Schwalbe CX Pro cyclocross tyres instead though if requested.

Alex rims are very popular on bikes at this price. The Raleigh uses Alex ACE19 rims drilled for 32 spokes front and rear. The hubs are practical units with Raleigh’s “RSP” branding.

Raleigh has indeed fitted a single chainring to the Performance 26. Its chunky 152mm cranks are Raleigh RSP badged but made by Lasco, the huge Taiwanese manufacturer of so many junior cranks. A chainguard is mounted either side of the chainring to ensure the chain doesn’t come off when riding fast over bumpy ground.

There’s an 8-speed Shimano HG30 cassette with sprockets from 11 to 32 teeth giving a nice wide range of gears. The Altus rear derailleur is at the entry level of Shimano’s MTB range.

The rear gear shifter is integrated with the short-reach right-hand brake lever from Microshift. We’ve always found that young riders like using the Microshift system: a brake lever, a separate gear lever tucked behind it to change to a large sprocket, and a small button-like lever to shift to a smaller sprocket.

Although the Performance 26 has no front derailleur Raleigh has chosen to keep the Microshift left hand brake lever/shifter in place rather than substitute it with a separate brake lever. They have, however, removed the two redundant gear levers and the mechanism from it. The advantage is that the left-hand brake lever matches the right-hand lever, but the installation does look a bit odd with its empty cable exit from the brake lever hood and the gaps where the gear levers once were.

You’ll find Tektro’s Oryx brakes on the Raleigh too. The Microshift brake levers are appropriately short-reach for small hands.

It does have Tektro RL576 cross-top levers fitted. As you can see from our head-on photo the Raleigh’s handlebars have a particularly curved shape and it’s all a bit crowded on the tops of the bars.

Most of the bike’s components carry Raleigh’s own “RSP” branding, including the saddle, seatpin, 70mm handlebar stem, and 360mm wide handlebars.

They’re all neat and functional, with the exception of the saddle which has been taken from Raleigh’s adult bike range and is much too large for a bike of this size. Hopefully Raleigh will update the spec to include a smaller saddle, but in the meantime you should factor in changing it for a decent junior saddle like the San Marco Concor Junior or the Madison Y04.

The seatpost clamp has a lot of layback so make sure you take that into account when fitting the bike to your rider.

The handlebars are the same width as those of all the other bikes in the group, but their shape is a bit different. They have a nice short forward “throw” and very shallow drops suitable for small riders, but they are more curved and less square than the others – think of the shape of Cinelli’s classic Criterium 65 bars. That means there’s less space for the hands on the tops of the bars, especially with cross-top levers crowding the same area. On the other hand, our test rider found that holding the drops was particularly comfortable because there are no square shoulders of the bars to get in the way of his wrists and forearms.

Our test rider really took to the Raleigh. He said it was one of the best in the group for “chucking around”. It was the bike that he chose to ride for fun after all the formal testing and photography was done.

You can buy the Performance 26 direct from Raleigh’s website, from big online specialists like Wiggle, or in person from many bike shops.

Raleigh is a very respected brand, of course, and we expect that buyers would be looked after well in the event of problems.

Although the Performance 26 has a RRP of £425, Raleigh bikes do tend to be discounted. For example, at the time of writing the bike is available for just £360 from Wiggle – and that’s excellent value.

Raleigh’s image is on the up and up, so that should help the bike’s future resale value if it has been well looked after.

We were very pleased to see such a strong contender from Raleigh, showing that the company understands children’s requirements. The Performance 26 doesn’t quite have the quality of the Luath or the Juniorworx but it does the same job very well. At its discounted price it’s a bargain.

Born in 1887, still going strong. We carry a diverse range of high quality bikes to suit all budgets. We also stock thousands of parts and accessories, supplying hundreds of Cyclelife and independent bike stores. View all posts by raleighuk